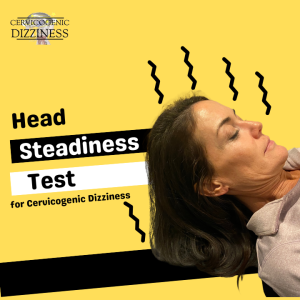 Head steadiness test is an assessment of the ability for someone to sustain steadiness of the head and neck under 2 different load conditions.

The test is typically used as a cervical sensorimotor measure.  However, the test can be argued to be predominantly a muscle endurance test and not a true sensorimotor test.

How to perform the Head Steadiness Test

Then, lift the head approximately 1 cm off the table and hold it still for 40 seconds.

The test is used in the research setting. Head movement is recorded continuously during the test using an electromagnetic motion tracking device.  This will allow for motion analysis to calculate average displacement.

Additionally, the test is used in the clinical setting. Head movement is recorded by the naked eye or through video.  We also examine for compensation patterns, such as upper cervical spine extension or thoracic extension.

There are no specific sensitivity or specificity values for the head steadiness test.

Therefore, assessing the endurance of the neck muscles is a component of the test.

You can learn more about how we incorporate the head steadiness test in our algorithm through our books and educational courses!